Everybody has seen the sunny, beachy and crowded Goa drenched in cheap alcohol with sand lodged in various nooks and crannies. I have too at a time when staying up all night, bar hopping, loading up on a noxious cocktail of King’s, Vinacola and Feni, then driving back home the very next day to face parents with a puppy dog face – all seemed like a good idea. Then the haze clears and you realize there is so much more to Goa than that.

You could spends days – scratch that – months exploring this magical land. Breathtaking empty beaches, lush greenery, glorious mountains, quaint little villages and an unending array of amazing mouthwatering food! My God, the food! Exotic stuff you don’t find anywhere else in India. This time I wanted to go one step further. I wanted to see this little paradise at its best – in monsoon.

Pune to Varca – the Drive.

It was pouring down as if the rain Gods had suffered incontinence and the God doctors were on strike for ‘reservation quota’ or something. Bridges were washing away, mountain-sides were crumbling and most of the lavish “River-View” properties had become part of ‘the view’ itself. Time to give your family a heart-attack by planning a 500 km roadtrip through mountains to an area which receives huge amount of rainfall. Inquiries to friends and on the  H V Kumar Forum on Facbook confirmed that all was well on our planned route of Chorla Ghat via Belgaum. I was looking forward to it.

We left mildly early at 6.45 am and joined the glorious NH-4 towards Karnataka. As always this particular stretch from Pune to Satara had received step-motherly treatment and it was like a mine-field with cars running helter skelter avoiding massive ponds and towering mud-hills. Things improved post Satara until Kolhapur, where most of the river-side suburb was flooded and half the town was commuting on the highway.But then came the unlikely word which puts a smile on every Maharashtrian motorist’s lips – Karanataka! 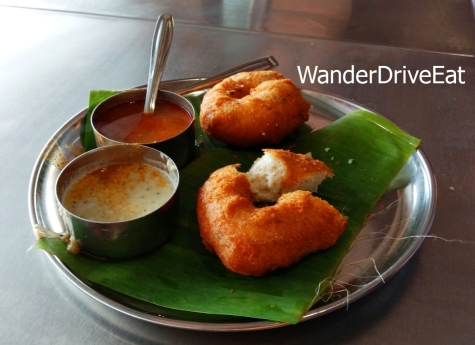 Despite intermittent lashings of rain, the ride to Belgaum was as soft and comforting as tatte idly and as smooth as frothy filter coffee. Speaking of which, I think I heard my stomach grumbling! Our typical stop at Tumkur Tatte Idly opposite Belgaum District Court was in order, downing some bishi bile bhat, uber-crispy medu vada and strong filter coffee. Post lunch we hit the amazing Chorla Ghat.

This ghat is a beautiful narrow road winding through the dense forest of the Mhadei Wildlife Sanctuary at the summit of which you cross over into Goa. The view of the valley is fantastic with multiple waterfalls and as you wind your way down the mountain you suddenly come upon the magnificent sight that is, Anjunem Lake.

The drive from here to Club Mahindra Varca was a long but picturesque one snaking through hills, small villages and then finally typical Goan coastal roads lined by coconut trees, farms and marshes. After checking-in and freshning up we hit the beach armed with umbrellas and raincoats but the rain eluded us and we were treated to a smashing cloudy sunset. Next on the cards was a romantic dinner at the Fisherman’s Wharf near Mobor beach.

Fisherman’s Wharf – This is slightly high end, really quaint restaurant on the banks of the river Sal. You sit at the edge of the river with the view of the Cutbona Jetty, watching fishing boats dock and local fishermen doing some late night fishing. The food was fantastic though. We had pomfret steak and the delicious Pork Sorpotel, which is pork innards (liver/heart/intestines/blood) in a tangy vindaloo sauce. It really did not taste funky contrary to what I had expected and loved it to bits. As I am a teetotaler since 3 years I washed it down with sweet lime soda. Nothing is as refreshing as that!

For a detailed review of all the food I had in Goa click here – Monsoon Goan Food-logue!.

The road from Varca is quite lonely at night and we saw 3 foxes and a wild cat on the way, which was quite exciting. Unfortunately could not get any pictures. 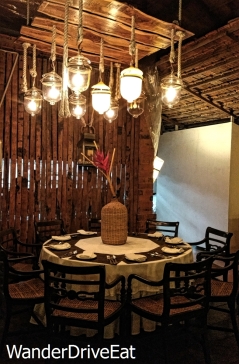 An early morning walk on the beach and a swim (in the pool, the sea is dangerous in the monsoon) later, the tiredness of yesterday’s long drive washed away and we went for an aimless drive on the coastal road towards Panjim. After a quick stop at Colva beach, which turned out to be the Calangute of South Goa, we kept driving further North. The lovely little villages like Benaulim and Cansaulim were amazing as we watched locals buzzing around markets buying vegetables, meat, fish and generally going through their typical week. 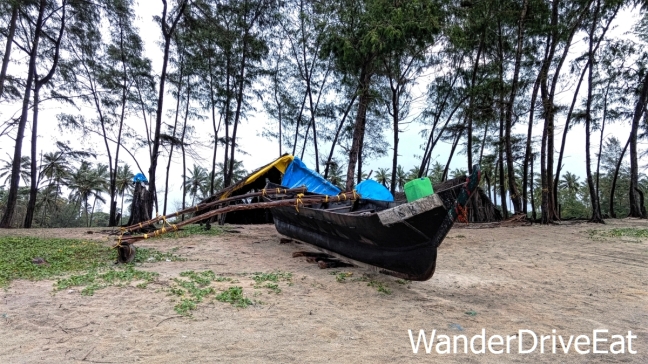 Nearing Vasco we turned around realizing that as there was no sign of rain, we rather spend some quality time on the beach and relax than just driving around to places we had already seen or ones that were too far off to explore. And when I say ‘we’ it’s implied the order came from the higher offices. So, the remaining two days were spent leisurely drinking tea and eating bhuttas (charcoal roasted corn on the cobs) on the beach. Long walks, splashing around in the sea and just lying on the sand staring at nature’s splendours. The cloudy sky was a treat to watch, the air was cool, the occasionally sunkissed sand was soft and felt nice on the skin. 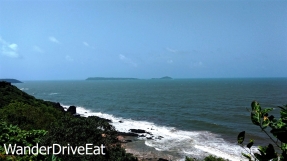 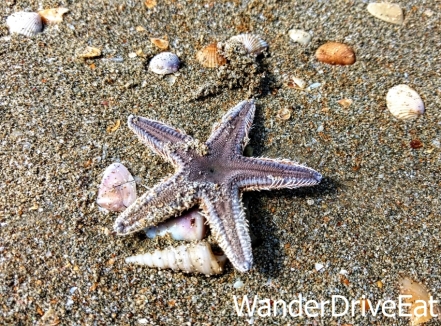 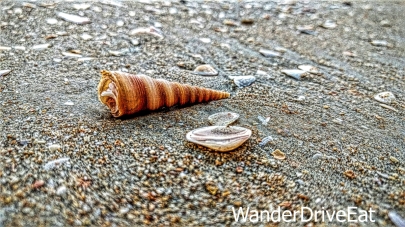 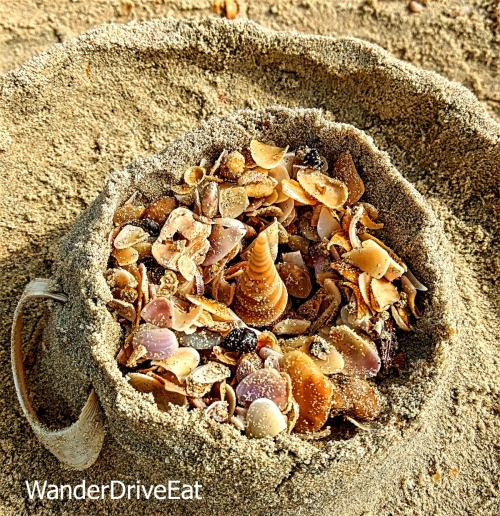 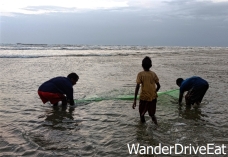 As the beach shacks were closed and our resort was hosting a Goan food fest we decided to eat the rest of our meals at the resort buffet and man it turned out to be a good decision! We gorged on an assortment of perfectly grilled fish (basa, mackerel, pomfret & river fish), prawns and squid in recheado or peri peri sauces as well as chicken cafreal, crab xec xec curry and pork vindaloo. It was a treat! 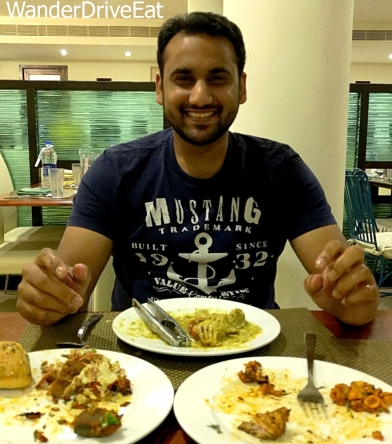 One detour I took on the way to do the typical cashew nut shopping was to have Goan pork sausage bread (chauris pao) in a small village (Betalbatim I think) near Colva. The owner basically serves this at his home through a window and it’s the most rustic and homely experience to have. Be prepared to not feel very welcome at their afternoon siesta hours, but you are served the most succulent, spicy, tangy, porky and fatty sausage stuffed in hot Goan pao which is crisp on the outside and soft on the inside. Definitely a must have if you are in Goa!

For a detailed review of all the food I had in Goa click here – Monsoon Goan Food-logue!.

Batteries recharged, skin tanned and faces smiling, unfortunately it was time to head back to reality. I did not do a lot of the exploring I had hoped to do but the weather was perfect to exploit the beautiful and uncharacteristically empty Varca beach. I had amazing authentic Goan food which is rarely found in our cities. Goa is truely beautiful, especially in the rains and as always, I vowed to be back. I promised myself, next time I would explore a bit more, wander more adventurously, drive more adventurously as well as eat more adventurously! A solo Goan adventure beckons!

3 thoughts on “A Monsoon Goan Sojourn”

There was an error retrieving images from Instagram. An attempt will be remade in a few minutes.